Baylor, Griner should have bright future

SAN ANTONIO — The Women’s Final Four will return to Indianapolis next season, a place that holds great memories for Baylor. That’s where coach Kim Mulkey’s team won the NCAA title in 2005. Might it be Baylor’s time again a half dozen years later?

Things can happen, of course, to derail a team between the end of one season — Connecticut beat Baylor 70-50 on Sunday in the national semifinals — and the beginning of another. But it doesn’t seem likely much will get in the way of Baylor being next season’s Big 12 favorite and a great candidate for another Final Four trip.

“I’m really proud we beat the odds and we got here, and I’m proud that we didn’t quit tonight and gave UConn everything we had,” said Morghan Medlock, the lone senior Baylor is losing. “They were just more experienced, and you can’t teach that overnight. 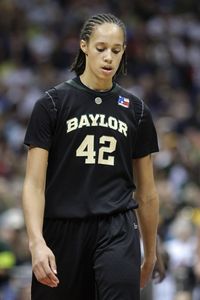 AP Photo/Eric Gay
Brittney Griner shouldn’t hang her head. Baylor loses just one senior, and one of her coaches thinks Griner has tapped into just 60 percent of her potential.

“I think next year, when these kids are back in the Final Four — which they will be — they’ll know what to do in situations because they will be more experienced than your average sophomores.”

Medlock certainly doesn’t lack for confidence about Baylor’s future, and for plenty of good reasons. Starting with Griner, who Sunday went head-to-head with the soon-to-be No. 1 draft pick in the WNBA, Tina Charles.

“She just did what normally every other post does,” Griner said when asked what tactics Charles used against her. “She was a lot better than most other posts.”

Indeed, Charles won the individual battle — 21 points, 13 rebounds, two blocks to 13 points, six rebounds, five blocks — and the overall war as the Huskies advanced to Tuesday’s title game against Stanford (ESPN, 8:30 p.m. ET). But, with a senior going against a freshman, that’s the way it’s supposed to be.

“It was definitely a battle, just physically,” Charles said. “Just trying to push her off the paint. You definitely can see she wants to work hard. When her team comes around her and tells her, ‘We need to post deeper,’ she responded and [tried] to get me deeper in the lane.”

Griner still has much to work on, of course, just as Charles realized she did after going against then-junior Sylvia Fowles in the 2007 NCAA tournament.

“Ball handling would probably be one,” Griner said when asked the things she’ll address most in the offseason. “Just getting stronger with my lower body and stop relying on my height.”

Griner’s older teammates, like junior Melissa Jones, had to adjust to playing with someone of the size and skill of the 6-foot-8 rookie. It has been a good learning experience for them, too.

“One of the coaches was talking about it the other day — that she’s only reached, maybe 60 percent of her full potential,” Jones said of Griner. “And that’s a scary thought, knowing that she hasn’t been playing this game for so much of her life.”

Griner has been a quick study, though, since seriously taking up hoops as a teenager. She had her rough moments this season — the roughest, of course, coming with the altercation at Texas Tech on March 3 and subsequent two-game suspension. But Griner came back from that as a player who seems all the more focused on getting better and not allowing herself to be frustrated by what anyone says or does to her out on the court.

As the teams shook hands after the Sunday’s game, UConn coach Geno Auriemma had a few specific comments to Griner.

Griner and fellow freshmen Shanay Washington, Kimetria Hayden and Jordan Madden have all had significant court time and were able to end their first season at Baylor at a Final Four.

“With all the playing time we got and experience in tournaments, it’s going to be something special,” Griner said of what’s coming for Baylor. “I feel like we will be back next year. We played a lot of top teams, and just learning from them and the experience of seeing how much it takes and just having everybody on the same page for where we want to go — it just really helps.”

Mechelle Voepel, a regular contributor to ESPN.com, can be reached at mvoepel123@yahoo.com. Read her blog at http://voepel.wordpress.com.